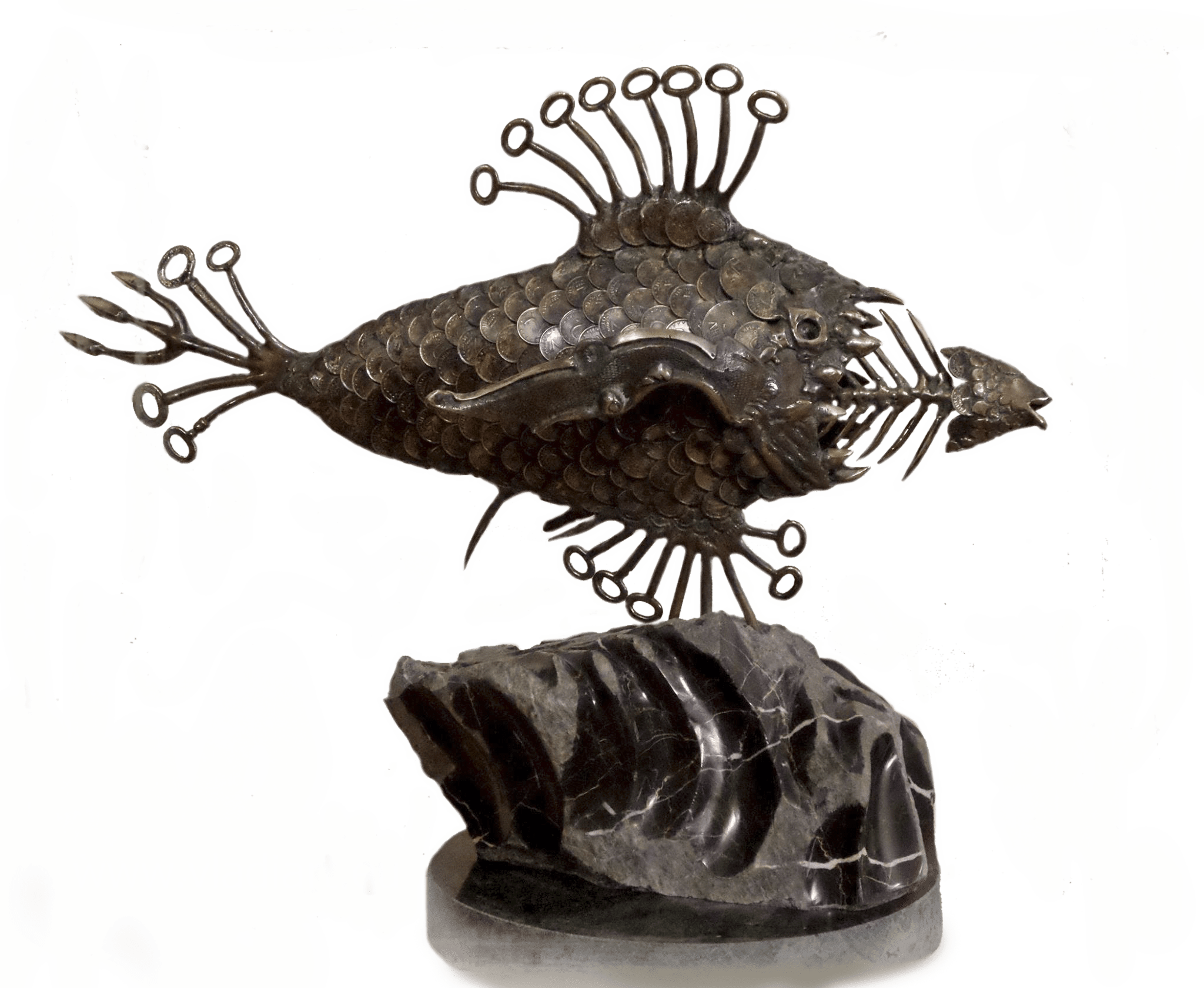 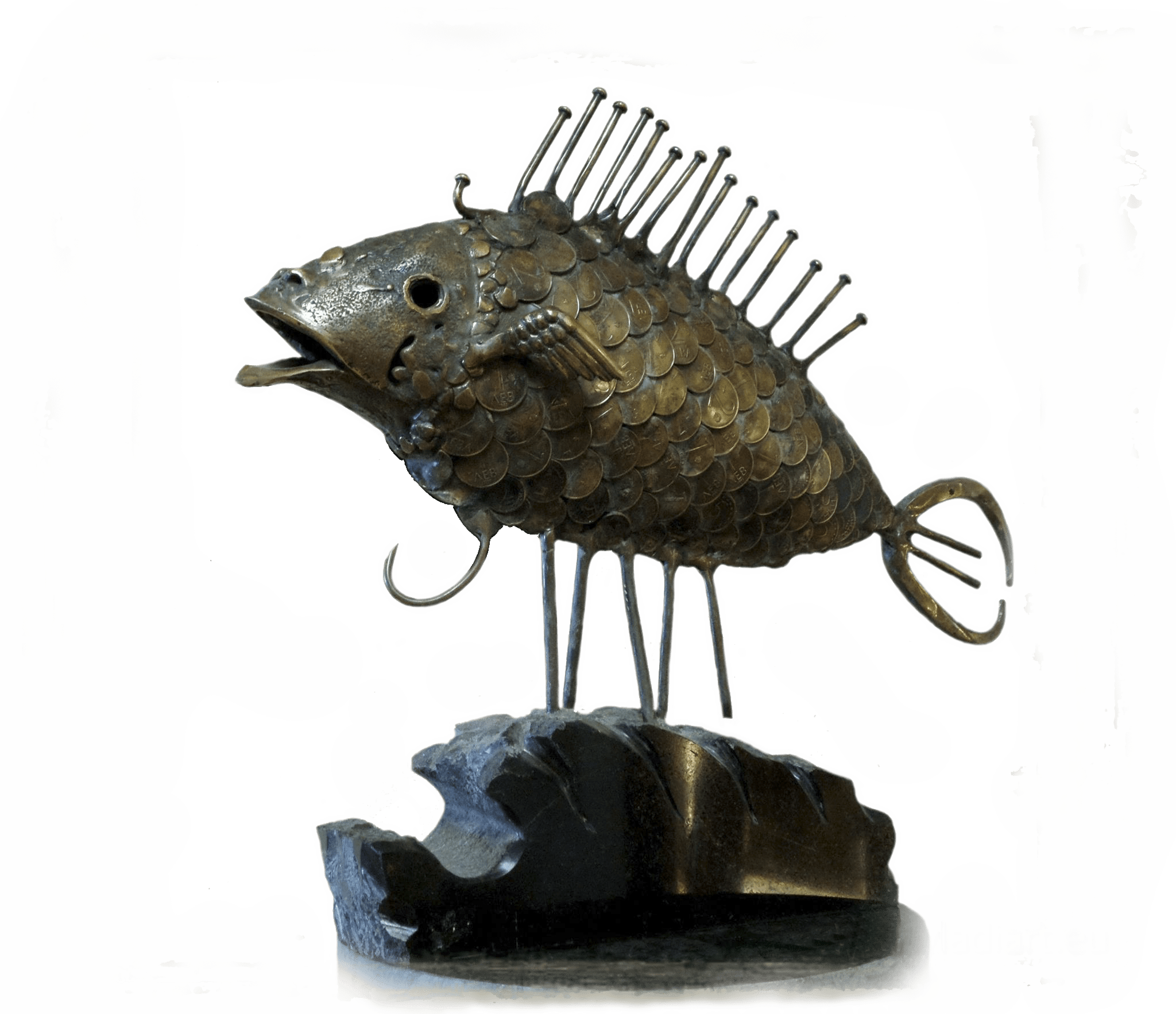 I was willing to bet a pretty penny that you’ll love these Art fish!
Filled with sculptures and works of art created strictly from coins, these are unique only and their members could love.

This sculptures made from recycled coins such as “Money” 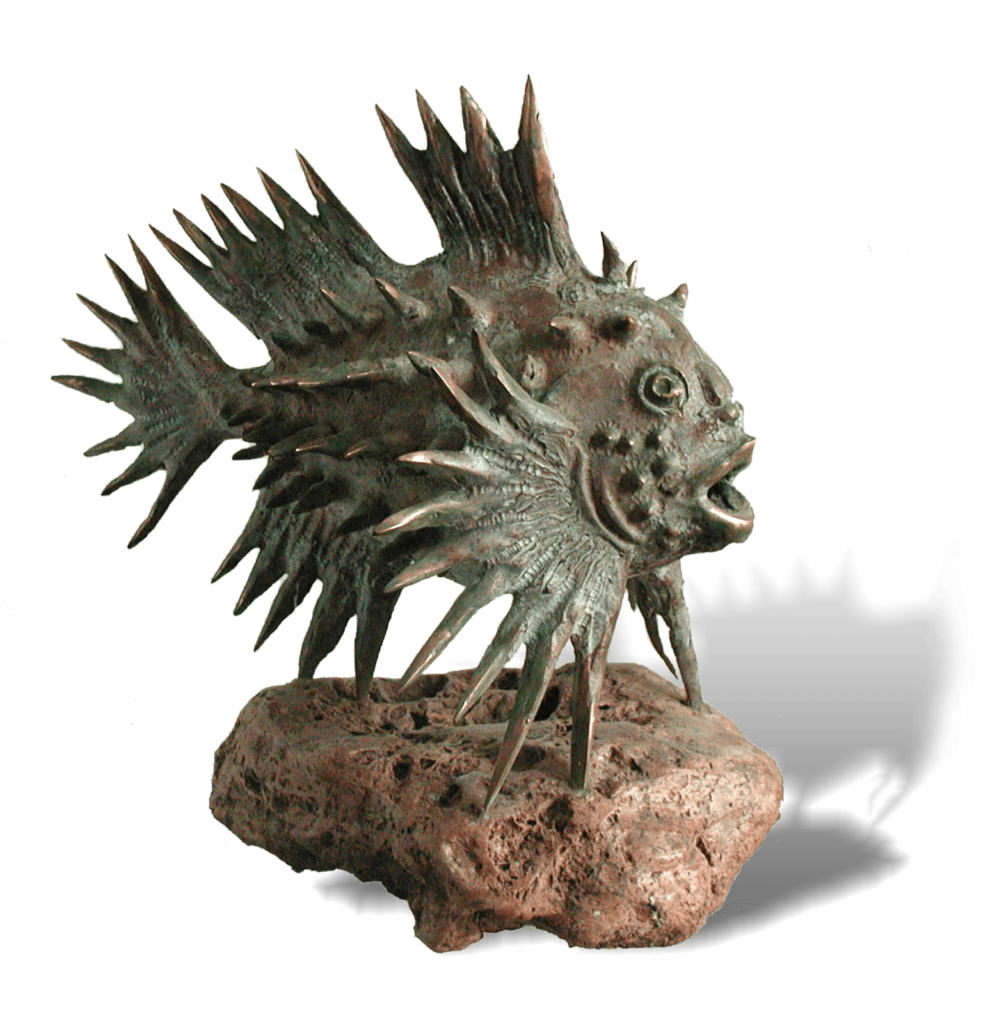 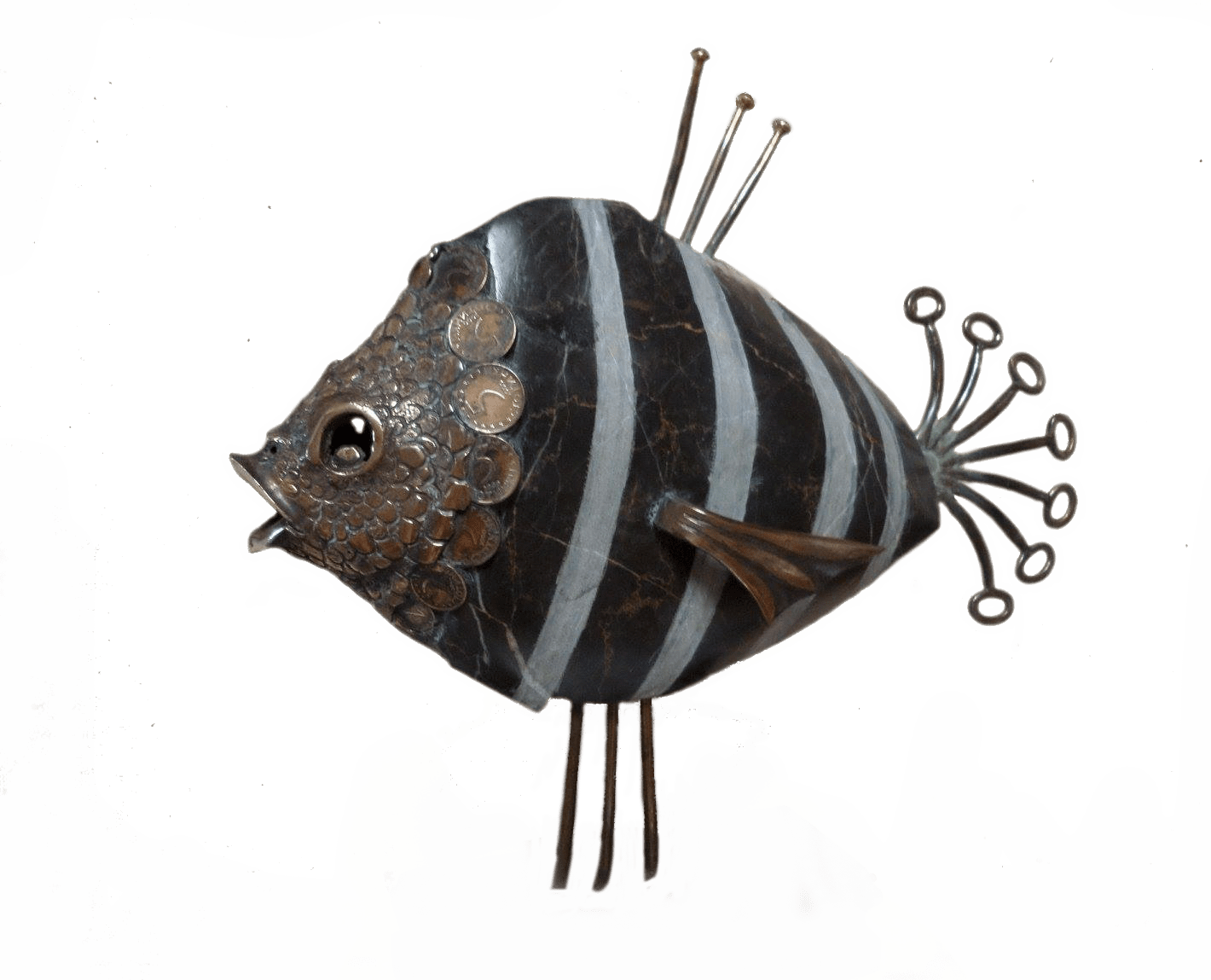 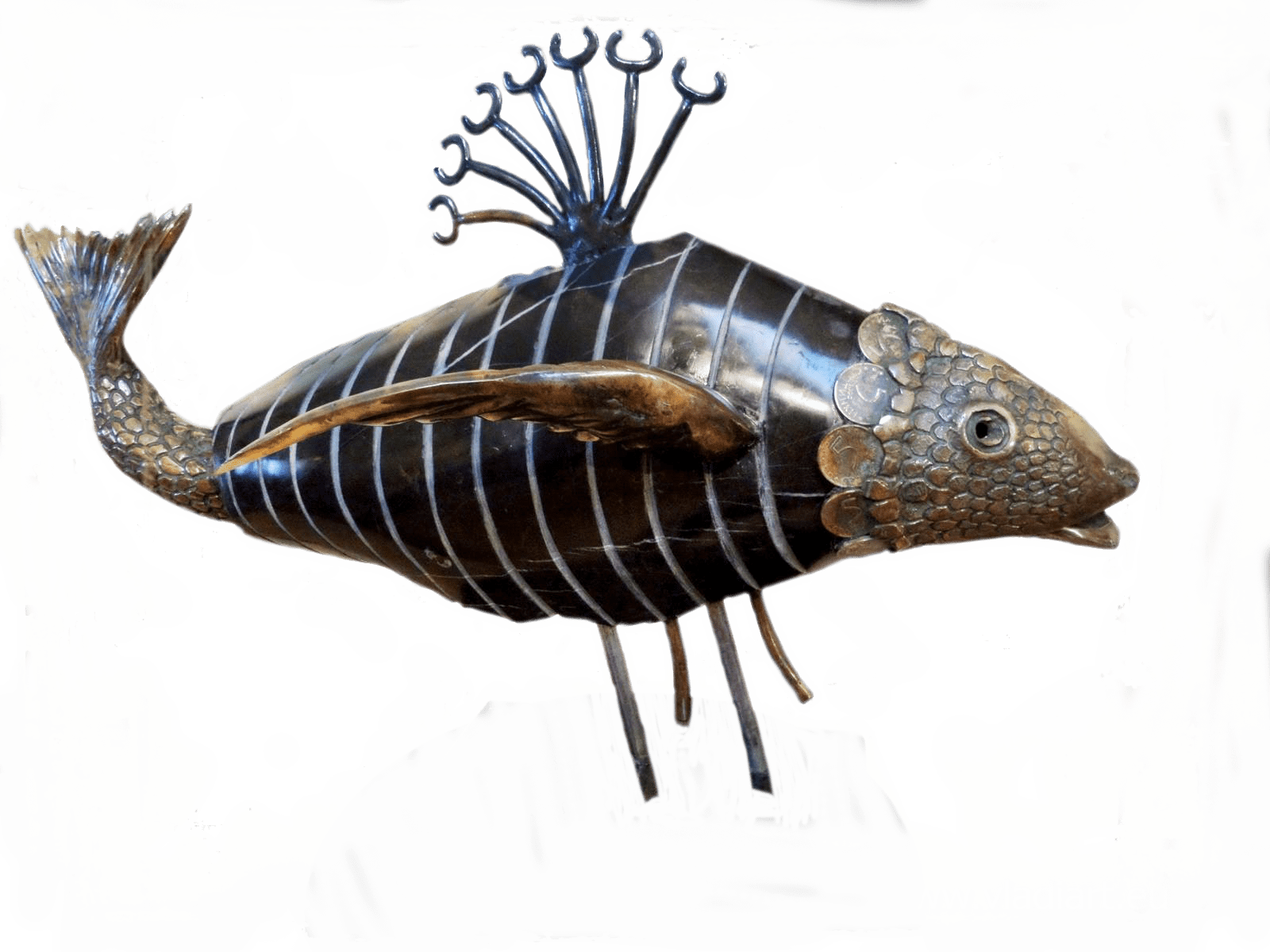 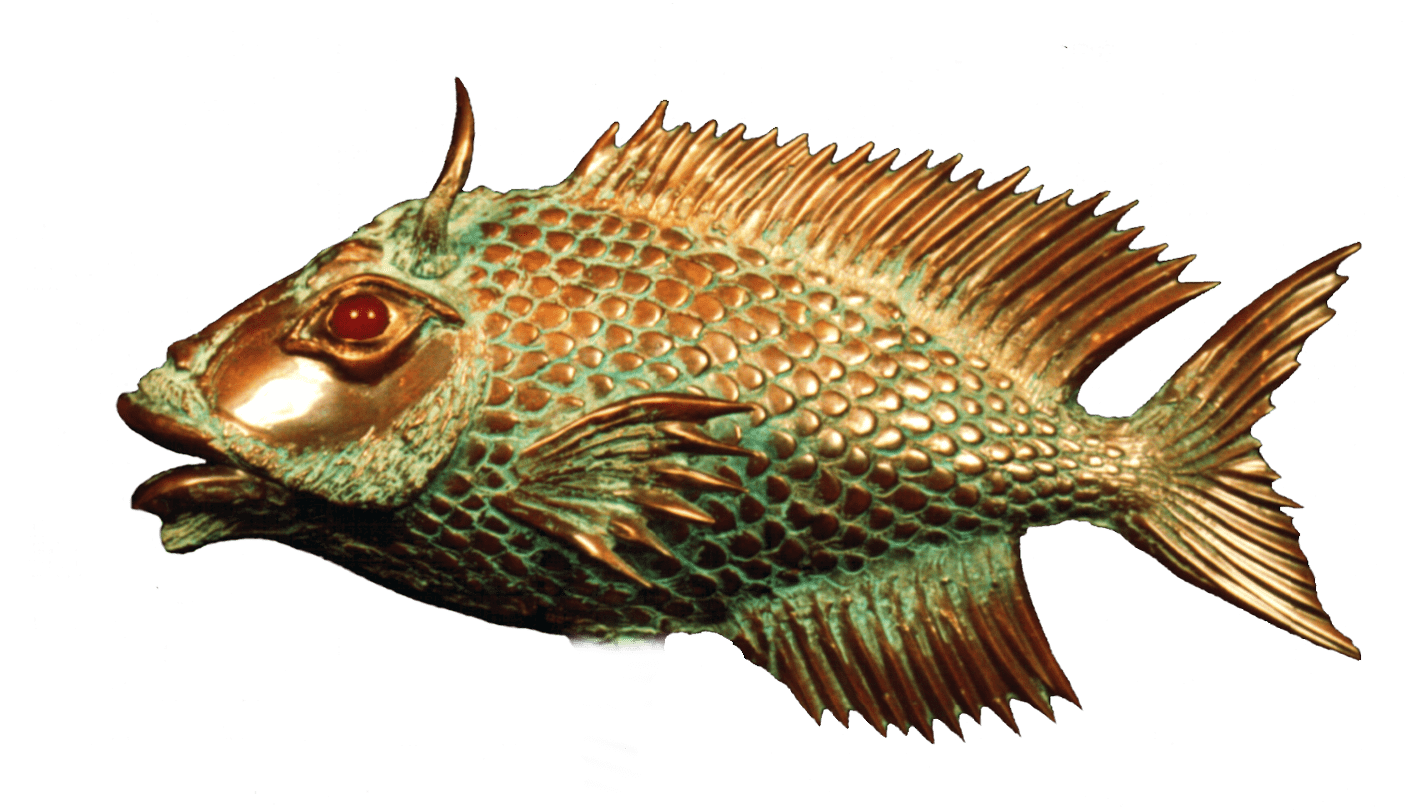 Some thoughts about Fishes………

As per Feng Shui, goldfish are known to bring good luck. Everyone feels positive and happy when they’re showered with good luck. It is advisable to keep nine goldfish, one black and remaining eight either in red or gold…
Traditionally, goldfish, particularly Koi, have been used as a symbol of good luck and good fortune. Several ancient stories and fairy tales also include stories of goldfish granting wishes or making dreams come true. In Chinese tradition, goldfish have an association with abundance.
According to tradition, ancient Christians, during their persecution by the Roman Empire in the first few centuries after Christ, used the fish symbol to mark meeting places and tombs, or to distinguish friends from foes: … Callistus that the fish symbol was known to Christians much earlier.
A fish symbolizes fertility, feelings, creativity, rebirth, good luck, transformation, health, abundance, serenity, intelligence, happiness, strength, and endurance. Connecting us with the water element, it represents the deeper awareness of the unconsciousness or higher self.

Generally, the coin in jewelry and souvenirs – not a novelty. Gypsy necklace created from a variety of levels of coins of different denominations. They also decorated scarves edges with coins, and while dancing they provocatively rang with the movement of dancers. From coins are made different pendants, charms, talismans. Recently revived different types of money trees, gift toads and piggy banks pleasant to the eye. It is believed that feng shui work is not only pretty, but also very symbolic as material well-being accompanied the holder of such toys. And the process of its manufacture can be excellent relaxer. Working with coins and other small things can solve endless problems. The souvenirs of the coins made ​​with hands, with imbedded in them the soul of a creator, will serve as a real mascot, attracting to you financial prosperity and good fortune..

The process of making such things made of coins is not simple. Thus it is necessary to closely monitor the distance between the rows, not allowing too wide gaps.
The artistic value is much higher than the total value of the individual components. After all, the inestimable value of the author’s ideas, and the work itself is simply incomparable with anything comparable. A striking example of this – little sculptures of Bulgarian sculptor Vladimir Iliev started from pennies.

With welding Artist can let his imagination run wild and make practically anything.

Made by Vladimir Iliev